A lot of people seem to get confused by the different features, details and serial numbers that are found on National El Trovador guitars. It was only in production for a little over 2 years but, rather interestingly, was caught up in a story of company anger and politics.

The guitar was first talked of at a board meeting in August 1931. It was in line with National’s policy to not establish an expensive wood-body shop of their own so the concept was to be outsourced to a jobbing manufacturer. By February of 1932, the Kay company had been selected to build them at a total neck/body cost of $7. The contracts were signed in April of 1932 and production of the guitar, now named the “El Trovador” started soon afterwards with final fitting out and assembly of the hardware being done at the National factory.
These instruments were instantly successful – high quality and full sounding, made of mahogany laminates with ivoroid binding, even around the coverplate edge. It sold originally for $50. It seems that somewhere around 550 of these Kay-builds were produced from April 1932 until December 1933. The earliest serial number we have found is K113 from early 1932 and the latest is K649 in late 1933. It seems that the numbers probably started at K100 – a typical National policy – thus giving us a total of close to 550.
During this period, the National company was angered by the copyright infringements of its’ cone systems by the California based Schireson Company that was manufacturing guitars under the Hollywood brand and even supplying cones to other builders. The cones were different to National’s product but nevertheless were stealing a large part of National’s market. Their company lawyers started to draw up plans to stop Schireson’s products. They issued legal letters – which were ignored. Anger mounted and plans were initiated to move it to court proceedings. This slowly boiled up through 1933 and into 1934. At the height of this, the Kay company started to produce their own version of the El Trovador, with similar styling, which they called the ‘Kay De Luxe’. Unbelievably, it was fitted with the Schireson cone. National demanded that they stop using it because they didn’t think it was right to be working with a company that had a supplier they were trying to sue!!
Kay refused – National had no choice but to stop dealing with Kay and the El Trovador project was instantly scrapped at the end of 1933.
This, however, was not the end of the matter. The guitar had been a good seller and National felt it had more units to sell so it commissioned the Harmony company to ‘take over’ and produce virtually a replica, or at least as near as they could get. The instrument that was produced at the end of 1933/early 1934 had a slightly different, wavy, Harmony-type headstock (typical of the National Trojan) and was fitted with the typical National-type tulip shaped tailpiece. The earlier Kays had, for the most part, trapeze type tailpieces. The Harmony f-holes were similar to Kays but were wider overall, fitted lower down in the body and there was a larger separation between the two parts of the f hole. The small holes were also in slightly different positions. The fingerboard marker pattern was much more elaborate with a star in the first fret. This was a Harmony designed pattern that had already been tried on Harmony’s upmarket f hole archtop – the Cremona. Later in the year, this pattern would also re-appear on the Harmony-built National Estralita. Some El Trovadors were still issued with smaller dot markets but not many.
These Harmony-built El Trovadors are easy to distinguish by their ‘H’ serial number prefix. Number H021 is the earliest we have recorded and H159 is the latest. So it would seem that 160 or so of these were manufactured before the El Trovador was cancelled in September 1934. It was cancelled in favour of the new 14 fret Harmony-built National Estralita. The 14 fret craze swept most guitar manufacturers at this time in 1934. 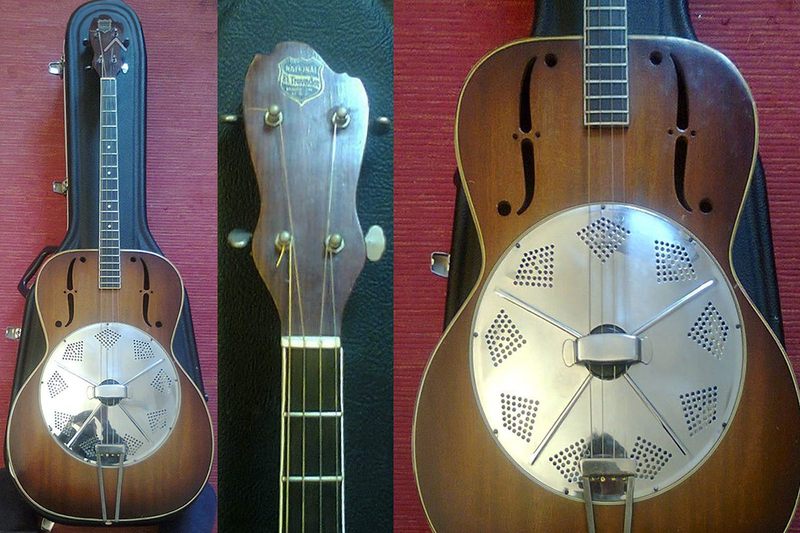 One other item must be mentioned while discussing this guitar. There are not many contemporary adverts showing the El Trovador, but the one’s that do exist all indicate the existence of a tenor guitar version of the El Trovador. At the present time, only one example (found in Italy) is known and pictured here. It actually seems to be built on a wider, Trojan-type body with the resonator cover pushed high towards the waist. This is probably why the narrow-waisted El Trovador shaped body was not used! It also features a very long trapeze tailpiece.
The headstock has an ogee-venetian shape that is typical of the Kay Kraft Venetian guitars of 1930 used by people like Curley Weaver and Buddy Moss. This detail alone, makes it certain that this was a Kay product from mid 1933 or so.